History of the company

The South Kazakhstan Geological Expedition (SKGE) was found as part of Kazgeofiztrest in April 1957.

He was born on September the 22nd, 1919, in Cheboksary city. In 1941, he graduated from the Kazan University faculty of physics and mathematics, specializing in “Geophysics.” He worked as an inspector of shipboard weather stations in Vladivostok, as a teacher and then as a deputy director of a hydrometeorological technical college within 1941-1946. From 1946 to 1950 he was an engineer, ahead of the field party, ahead of the field Central-Kazakhstan aeromagnetic geophysical expedition of the Central Asian geophysics trust.

In 1958 about five parties were already working in the field.

VES electric exploration of the survey was carried out in the winter between 1958-1959.

At the end of 1959, it was decided to build a complex of buildings and facilities for reserve locating of USSR Ministry of Geology in case of war near the expedition territory along the line of the Ministry of Civil Defense that had been built by 1965.

The expedition subdivisions started to carry out field works throughout the entire territory of Kazakhstan, including oil and gas prospecting provinces from 1973 after the SKGE transformation into the Kazakhstan aero geological and geophysical expedition (KAGGE). Two aero parties (Karatau and Taskorinsky) were created to implement complex aeromagnetic and – gamma-spectrometric surveys, the West Kazakhstan aeromagnetic party, and an aero survey party was found to conduct high-precision aeromagnetic surveys mostly in oil and gas prospecting areas.

The first comprehensive aero geophysical surveys as aeromagnetic, aero gamma and spectrometric surveys were made in 1973-1974 at the ASG-48 the aero geophysical station consisting of AMF-21 Ferro probe aero magnetometer and ASG-48 spectrometers, and starting from 1975 the surveys started by a more modern 71 CM AGS station equipped with the ASG-71 spectrometer and the high-precision nuclear magnetometer YaMP-3, developed in KazAUIGE.

High-precision aeromagnetic surveys were performed using KAM 28 quantum aeromagnitometer and M-214, M – 305 proton magnetometers on a portable gondola with aerial photograph navigation, and by using electronic navigation of routes starting from 1965. Within the existence of the Aerogeophysical expedition about one million square kilometers, i.e. almost a half of the Kazakhstan territory was captured by high-precision aeromagnetic and complex aeromagnitogammaspetrometric surveys.

Surveys were generally carried out by An-2 aircraft, at a speed of 175 km/h. the Mi-4 and Mi-8 helicopters were used as the carrier in strongly cross-country terrain in Karatau and Alatau mountains. Survey of the Caspian Sea water area according to flights safety requirements was carried out by two-engined Il-14 plane at the height up to 100 m. The improvement of the survey equipment which has happened within one decade (seventieth or eightieth) has allowed reaching an increase in measurements accuracy of the magnetic field tension from ± 25-50 Gtl to 0,1-0,5 nTl.

He was born on September the 1st, 1938, in the Chui district of the Dzhambul region. He graduated from Kazakh Polytechnic Institute in 1962 with a degree in mining engineer-geophysicist. From 1962 to April 1971, he worked in the field seismic parties of the Guryev Geophysical Expedition as an operator, engineer-geophysicist, senior geophysicist, head of the party and head of the production and technical department from 1962 to April 1971. Moreover, from 1971 to 1979 he worked in the Ili geophysical expedition as ahead of the field party, ahead of the production department. In 1978 he was appointed as a chief geophysicist.

In 1980, a computer center was commissioned, which radically changed the processing of primary field materials of all geophysical surveys types conducted on an expedition.

Konstantin Ivanovich Chebotok was the chief of the Aerogeologic-geophysical expedition in 1982 – 1983.

He was born on June the 17th, 1937. He graduated from the Kazakh Mining and Metallurgical Institute with a degree in mining engineer-geophysicist. He began his career in 1959 as a geophysical engineer of the aerospace search party of the Ili Geophysical Expedition. He was senior geophysicist, chief engineer, head of Field Party from 1963.

Anatoly Ivanovich Sapozhnikov was appointed as the chief of the Aerogeophysical expedition in 1983.

He graduated Geological Survey Faculty of the Kazakh Polytechnic Institute with a degree in Geophysical Methods of Prospecting and Exploration of Minerals. After graduation the institute, he joined the field party of Ili Geophysical Expedition, where he worked as an engineer, senior engineer, chief engineer, and head of a gravimetric party.

From the beginning of 1990th, the works on creation of aero geophysical data bank on the Republic of Kazakhstan has begun.

On June 6, 1994, the aero geologic-geophysical expedition was reorganized into «Aerogeophysics» JSC.

At the end of 1995, the Decree of the Government of the Republic of Kazakhstan established Geotex JSC, to which almost all the expeditions of Kazakhstan, which were part of the State Geophysical Holding Companies, were transferred.

On April 16, 1996, Aerogeophysics JSC became part of Geotex JSC as a department of geological and geophysical works (DGGW).

He was born on March the 20th, 1949. In 1973 has graduated from geological faculty of Saratov State University majoring in “Geophysical prospecting methods and mineral exploration”. His professional experience started in an aero geologic-geophysical expedition where he passed the way from an ordinary field engineer-geophysicist to the director of Astrogeophysics JSC. DGGW left the of Geotex JSC structure on August the 25th, 1997, and having connected the DGSW (department of geological and scientific works) was reorganized into Scientific-production center GEOKEN LLP by focusing the majority of not seismic works of the JSC.

Starting from 1998 and up to present times Bisenbay Bulatovich is a General Director of SPC Geoken LLP, Academician of the National Academy of Sciences of the Republic of Kazakhstan (NAS RK), Deputy of the regional maslikhat of several convocations, Full member of the European Association of Geoscientists and Engineers (EAGE). He was awarded the title of “Standout of subsoil exploration” and “Honorable Explorer of the Republic of Kazakhstan Subsoil”.

Under the leadership of Shagirov B.B., the company SPC Geoken did not only overcome difficult years of an economic crisis at the end of the 90th, but also became one of the leaders in its field later.

Within 1998-2003 the work on the modernization of the main modules of the ACOM/AGS system was carried out. A complex of new programs for processing aero geophysical information has been developed. Experimental – methodical party performed thematic works to improve the field and cameral work methods, methods of geophysical data interpretation, summarizing the previously performed geophysical results studies in various regions of the Republic of Kazakhstan, drawing up structural tectonic maps for individual structural and formational areas, modeling the geological structure based on data complex geological and geophysical research.

The team of the Aerospace Geological Party carried out thematic works on improving the methods for interpreting remote sensing materials (space, aerial photography and radar), compiling aerospace photographic maps of individual sites, regions and throughout the Republic of Kazakhstan. The photogrammetric section consisted of the planning group for the preparation of high-altitude support of gravimetric surveys, a group for compiling scaled photo circuits and photo plans, photo labs. The site for automating the interpretation of aerial photographs has been studying the geological information content of the relief, automating the process of interpreting aerial photographs.

The factual material accumulated over many years and the level of specialists professional training during the period of restriction of the industry’s financing made it possible to perform office works to create an automated (electronic) cartogram of aero geophysical study of the republic’s territory, together with employees of the Almaty expedition commissioned by the “Kazakhstan Caspian shelf” consortium to perform the Caspian basin’s geological structure sea, to prepare packages of geological and geophysical information on investment blocks.

In 2011, SPC Geoken successfully completed marine gravity exploration in the Kazakhstan sector of the Caspian Sea. The total area of research was 115,000 sq.km, the gravity volume and magnetic measurements performed more than 40 000 km.

SPC Geoken significantly expanded its own practical experience in marine gravity exploration with gravimetric systems of various types and became the owner of the technology of gravity and magnetic exploration both in the open sea and in difficult conditions of the transit zone based on the result of the research carried out.

Except for these directions, the works which began as early as the aero geophysical expedition on the database creation of aero geophysical surveys of the Republic of Kazakhstan territory were carried out. The drawn magnetic field maps on paper were transferred to a digital format. 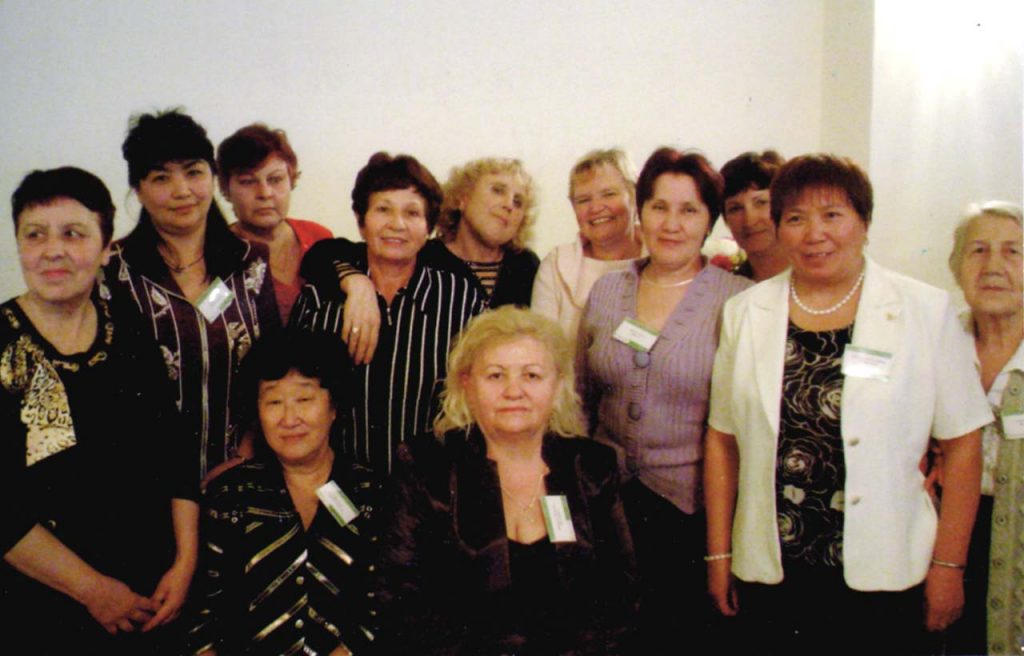 Group of specialists for creation the aero magnetic data bank

Over the 20 years of its existence, the organization has completed works on topographic and geodetic support and engineering surveys for the Tengiz – Kulsary oil pipelines, Kazakhstan – China, “Central Asia-Center” gas pipeline, the Shu-Shyganak PL -500 power lines, airports in Astana and Uralsk, the Bautino seaport, gravimetric surveys in the Aral Sea region, in the coastal zones and waters of the Caspian Sea, gravimetric and magnetic surveys in areas of a number of oil and gas fields, bathymetric surveys in the Kazakhstan sector of the Caspian Sea and etc.

That is because SPC Geoken Company performs work on 30 and more objects in all territories of the Republic of Kazakhstan and neighboring countries annually.

The company has a highly qualified staff. Young professionals who are attracted as interns from the leading scientific and technical universities of the country and abroad are successfully employed with an opportunity of subsequent employment along with employees with extensive experience (more than 20-30 years).

Currently, SPC Geoken has the necessary set of modern hardware equipment, the latest programs for processing and interpreting geodata, and a sufficient stock of computing equipment. Available material base allows us to perform a wide range of work in the field of geology, geophysics, geodesy, hydrography, engineering surveys, as well as in a number of other areas at a modern technological level and with high quality.